Team Rocket has always been an iconic foe for Pokémon trainers. I am not only referring to Jessie and James and their inseparable Meowth, but also to all the others belonging to this dark organization of “bad guys” who continually try to throw the world of Pokémon into chaos.

In this context, over the years more and more characters have been added, which fans have enjoyed defeating in the various video games of the saga. Among these there are you too and, in this regard, lately, you are wondering how to beat Sierra on Pokémon GO, as it is quite difficult for you to succeed.

How to find Sierra Pokémon GO

If you’re already familiar with Team Rocket leader mechanics in Pokémon GO, like Arlo, you probably already know what you need to do to find Sierra. However, it refreshes your memory a little.

In order to face this character, there are some requirements to be met. More precisely, you need the Radar Rocket, which is the tool that allows you to find the components of Team GO Rocket.

To obtain the object in question, it is necessary to find 6 mysterious components. The latter, which according to Professor Willow appear to be made of a metal alloy and are cool to the touch, have purple-colored screens. It is unclear why these mysterious components were provided to Team GO Rocket Grunts.

According to Willow, these components could be used by evil members of the organization to detect Pokéstops and raid Eggs and resources. However, the professor claims that he has not really fully understood the usefulness of these devices and that he thinks that it is something that also has another use.

In short, it is important to recover these mysterious components: to do so, you must defeat the Recruits of Team GO Rocket, which you can usually find in Pokéstop or through the balloons that appear every now and then in the game world. If you’ve played Pokémon Go a bit before following this guide, you’ve probably met at least one member of Team GO Rocket before, so you shouldn’t struggle to find others.

Once you have obtained 6 mysterious components, a special message will appear on the screen that will indicate the possibility of assembling the Radar Rocket, which is the necessary tool to find the leaders of Team GO Rocket within the game: you just have to activate it, to continue.

Going into more detail, you will have to press the Assemble button, present in the pop-up that will appear on the screen. After that, all you have to do is access the Exchange and activate the Radar Rocket from here.

Alternatively, if you want to try to get into the action as quickly as possible, you could consider purchasing the Radar Rocket tool for 200 Pokémon and directly from the in-game Store. I remind you that the “minor” denominations relating to the in-game currency are generally 100 Pokémonete (0.99 euros) and 550 Pokémonete (5.49 euros). For more details, you can consult my tutorial on how to earn Pokècoins on Pokémon GO (in which I also illustrated some free methods to obtain the currency in question).

Net of this, you may also be interested in learning about the issue of Special Research. The latter can in fact be useful to prepare for battles with the leaders of Team GO Rocket, as they provide rewards that you might find interesting (who said the possibility of catching shadow Pokémon?).

I don’t want to give you too many spoilers on this, but you probably want to consider this Special Researches related to Team GO Rocket, which could lead you to intriguing confrontations. In any case, you have to take John’s activities into consideration.

To proceed, it is necessary to start from the mission called A difficult situation, which you can find by tapping on the spyglass icon (you must be a Trainer of at least level 8) located at the bottom right. To complete the challenge in question, you will actually have to carry out operations that are not too complex: perform 5 upgrades, evolve 2 Pokémon, defeat 3 Team GO Rocket Grunts and capture 2 Shadow Pokémon. After that, you will need to purify 3 Shadow Pokémon and purify a Grass, Fire, or Water Pokémon. If you are familiar with the game, you shouldn’t have any particular problems.

Later, you will unlock the Special Researches related to Giovanni, which I recommend you do if you want to get to Sierra, Arlo and Cliff, the three leaders of Team GO Rocket. In any case, to find the latter using the Radar Rocket, you will probably have to search a bit. In fact, you will be shown the Pokéstop where you can find the leaders, but you will not be guaranteed to meet immediately with whoever you want.

Net of this, I remind you that Sierra can potentially also appear in the classic hot air balloons that peep out from time to time on the map. In short, now you know a little bit of everything there is to know to find this character.

After showing you the “preparations” to get to Sierra, I would say that it is time to take action and actually analyze how the battle against this mysterious woman unfolds.

The first Pokémon “deployed” by Sierra is Sneasel, of the Dark / Ice type. This is probably the simplest part of the battle.

In fact, by choosing a suitable Pokémon, you will be able to defeat Sneasel in no time at all. In this context, to give you a practical example, a Pokémon like Lucario, of the Fighting / Steel type, is perfect.

The Pokémon mentioned can prove particularly useful during the battle against Sierra, as it can potentially take out Sneasel’s defenses very quickly. In any case, in general, at this stage, the advice is to choose a Fighting-type Pokémon (for example, Machamp), so as not to have too many problems.

There is therefore not much to say for this first “clash” since, in fact, it is possible to prepare well before the battle.

The second phase of the battle against Sierra instead involves the random choice of a Pokémon between Ampharos (Electric type), Granbull ( Fairy type) and Gliscor (Ground / Flying-type). You understand well, therefore, that in this phase a totally different Pokémon could happen to you, so it is good to try to prepare yourself for all eventualities.

If Ampharos, you may bet on a type Pokémon Earth / Rock or otherwise Earth. For example, Rhyperior could guarantee you great satisfaction, but Groudon could also be for you.

If, on the other hand, Granbull happens to you, probably the best choice is to bet, for example, on Pokémon of the Steel / Psychic or Earth / Steel type. Two names? Metagross and Excadrill might be for you. In general, aim for Steel or at most Poison.

Finally, as regards Gliscor, in this case, it is good to choose an Ice type. Among the most interesting Pokémon to use in this context are certainly Glaceon and Mamoswine (Ice / Earth). 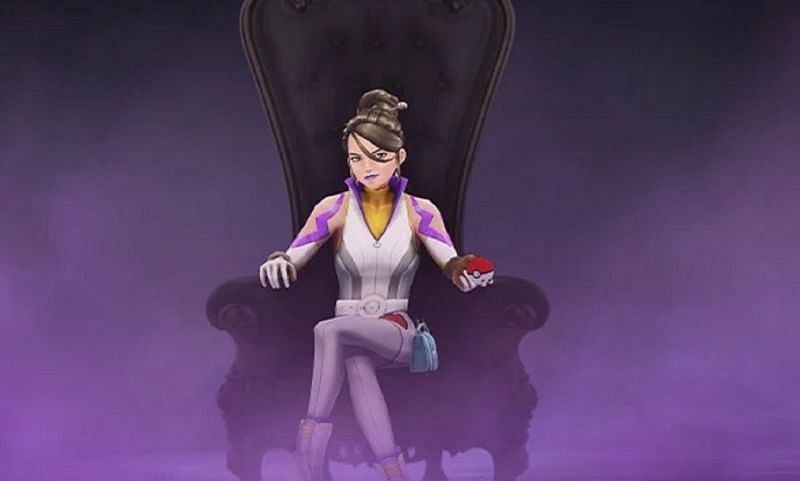 At the third and final stage of the fight, you must prepare for the arrival of one of Houndoom (Dark / Fire), Kingdra (Water / Dragon) and Drapion (Poison / Dark). This is probably the most challenging phase of the confrontation with Sierra.

Starting with Houndoom, the advice is to use a Fighting-type Pokémon. If you have Lucario (Fighting / Steel) on your team, you shouldn’t have any particular problems, but a Conkeldurr or a Machamp could be for you too. Alternatively, aiming for a Water / Earth type like Swampert may not be such a “bad” idea.

Moving on to Kingdra, the best choices probably fall on the Dragon-type. Some names? Palkia (Water / Dragon), Dialga (Steel / Dragon) or Dragonite (Dragon / Flying). Alternatively, a Psychic / Fairy-type Pokémon like Gardevoir could guarantee you good satisfaction.

Finally arriving in Drapion, in this case, it is good to choose Ground-type Pokémon: Excadrill (Earth / Steel) or Groudon will be just fine. In short, keep in mind the type of Pokémon used by Sierra during the battle and make your choices in a thoughtful way.

In any case, I remind you that Pokémon GO is a constantly evolving game, so the developers could make changes to the mechanics related to Sierra at any moment. This also means that there may be changes in terms of Pokémon used by the character. Net of that, you are now aware of everything there is to know and you also know what you need to watch to try to defeat Sierra: the type of Pokémon she uses.